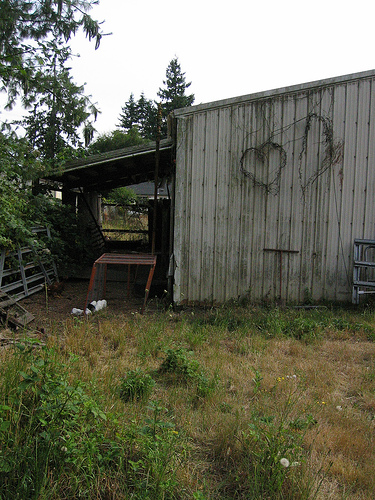 Grandpa Les wanted a new barn, so while Grandma Lucy was away at work, he had a slab poured on top of Great Grandpa's sixty-year-old asparagus and rhubarb patch. sadly, the asparagus and rhubarb aren't coming back, so we might as well make the best of the barn. at the moment, it houses a goat and some chickens and a whole lot of sundry crap. included in that crap are a bunch of windows that we'll frame into the south wall to let in some light (it's generally a pretty dark barn). we'll also replace a few of the corrugated metal panels on the roof with transparent polycarbonate panels to let some more light in. insulation may follow. fruiting vines will grow up walls and over the roof. better plumbing and wiring. cleaning, organizing, removing. shoring up lofts. there's a lot of work to do before the barn is a really useful space again, but the potential is there and we're moving steadily in the right direction. mostly.